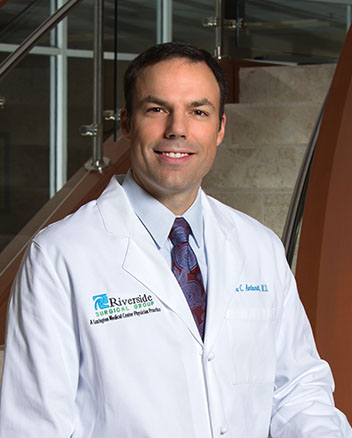 Dr. Antonetti is a specialist in minimally invasive surgery. He performs over 500 laparoscopic operations each year including procedures for reflux (GERD), gallbladder disease, diverticulitis, cancer of the esophagus, stomach and colon, as well repairs for all types of hernias.

Additionally, he is active in all aspects of general surgery, such as the diagnosis and treatment of disorders of the breast, skin and soft tissues, and endocrine glands (thyroid, adrenal, etc.)

Dr. Antonetti was Board Certified in 2003 and is a Fellow of the American College of Surgeons. He is also a member of the Society of Gastrointestinal Endoscopic Surgeons and the American Society for Metabolic and Bariatric Surgery.

Together with Drs. Givens and Strickland, they formed the South Carolina Obesity Surgery Center (SCOSC). The SCOSC was the very first weight loss surgery practice in the midlands and the first obesity surgery practice in the state of South Carolina. The SCOSC achieved its first Center of Excellence Award from the American Society of Metabolic and Bariatric Surgery (ASMBS) in 2005 and its second designation as a Center of Excellence, from the American College of Surgeons, in 2008. By the end of 2008 the surgeons of the SCOSC had performed over 3000 bariatric surgeries.